With Reproductive Freedom in Danger, New Jersey Must Expand Protections and Access

When Texas banned nearly all abortions, it showed us that what happens on the state level can reach far beyond state lines. Just as starkly, it has shown the grim reality that when reproductive freedom comes under threat, people of color and those on the economic margins will undeniably bear the brunt of the harms caused by abortion restrictions.

Following the Texas ban, people flooded New Mexico and Oklahoma for appointments – but those without the resources required to book appointments, travel hours over state lines, miss work, secure childcare, and pay medical expenses could not access the care they needed.

While New Jerseyans aren’t subjected to the extreme restrictions happening in Texas, abortion access and reproductive health care remain out of reach for far too many. Though New Jerseyans currently have the right to an abortion, that doesn’t mean that everyone can access it. It’s past time for New Jersey to affirm autonomy, racial and economic justice, and community health to ensure that reproductive health care is accessible for all who need it.

We can achieve that by passing the Reproductive Freedom Act (S3030/A4848), currently before the New Jersey Legislature. 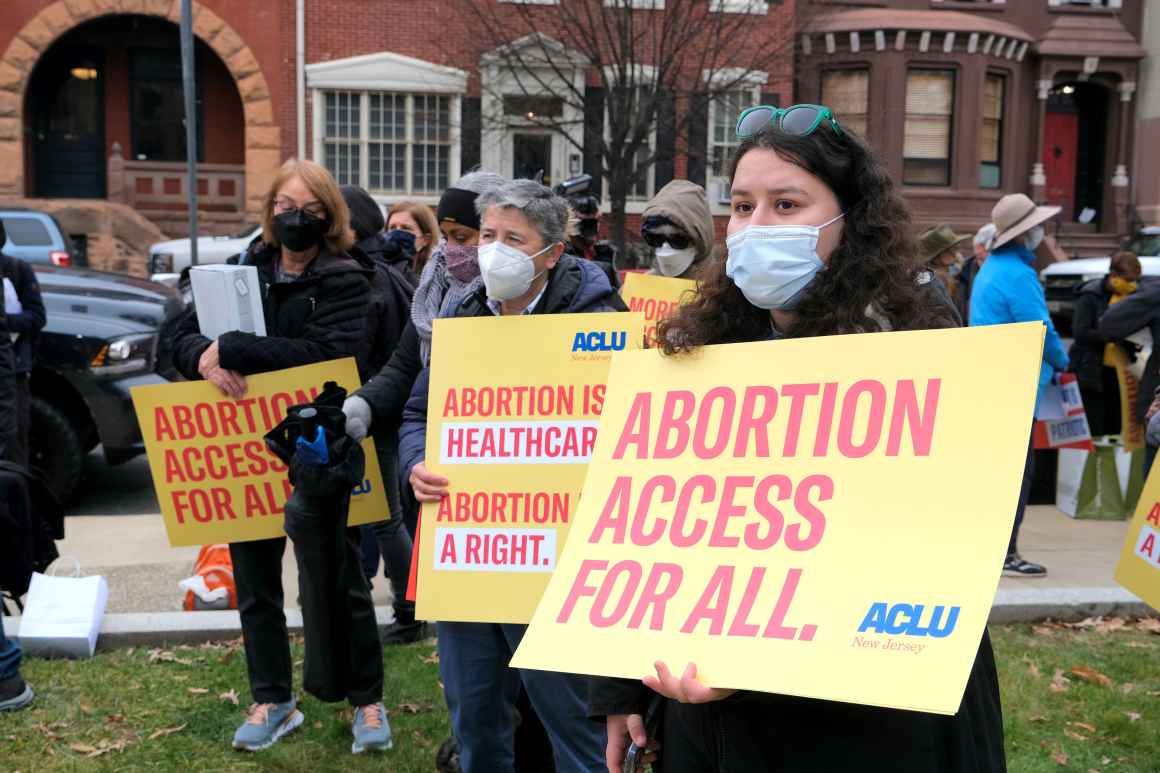 Protesters rally in front of the State House in Trenton in support of the Reproductive Freedom Act. (Photo by Christopher Lopez for ACLU-NJ)

The Reproductive Freedom Act – known as the RFA – seeks to dismantle barriers to abortion that are rooted in systemic inequities and white supremacy while expanding access to reproductive health care for all New Jerseyans, regardless of income level, immigration status, or gender identity.

In a 2021 poll, 87 percent of New Jersey residents said pregnant people should be the ones who make decisions about abortion, not politicians. The centerpiece of the RFA takes that to heart, declaring the right to reproductive health care, including abortion, by law. Reaffirming New Jerseyans’ fundamental right to autonomy is an essential part of protecting and expanding access to reproductive health care. The RFA declares that the decision if and when to seek an abortion is a decision made by a patient in consultation with their health care provider.

This declaration is necessary because it provides patients and providers with a clear affirmation of the right to abortion. But a declaration of rights doesn’t ensure those who need care can access it. Many barriers – including high costs, limited access to providers, discrimination, and more – prevent people from getting the care they need. That’s why the RFA can’t stop at simply declaring the right to abortion in New Jersey – it must expand how people access care in the state.

The RFA will begin to remove some of these barriers, especially for people of color, low-income New Jerseyans, people who are LGBTQ+, and immigrant community members who are all disproportionately affected by these barriers to accessing care. And for New Jerseyans who live in the intersections of these identities, the obstacles are that much greater.

The attacks on reproductive freedom in state legislatures and the cases before the Supreme Court make it all the more urgent for New Jersey to unequivocally affirm our right to reproductive health care, including abortion. But we cannot and will not stop there. We must commit to removing the harmful barriers that make accessing that right so difficult for so many. In the past three years alone, 12 bills have been enacted around the country to protect and expand access to abortion care. By making the RFA law, New Jersey will join these states in leading the way toward protecting and expanding reproductive freedom.

The experiences of patients and providers have shown that systemic inequities make accessing the constitutional right to an abortion out of reach for far too many New Jerseyans. The RFA would ensure that all New Jerseyans can make their own decisions about their bodies, health, and families free from discrimination and government intrusion and without barriers to equitable access.

New Jerseyans have the power to demand that abortion be accessible and safe for everyone, regardless of race, ethnicity, income, gender identity, or immigration status. New Jersey has the opportunity to prioritize equity and justice by passing the Reproductive Freedom Act. Rights without access is not enough.

Rights are Not Enough — We Must Advance Equity by Removing Barriers...

The Best Decision: How Abortion Changed These Lives for the Better

ACLU-NJ Submits Comments on Proposed Rules for Freedom of...